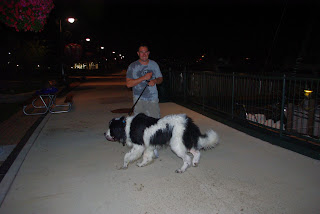 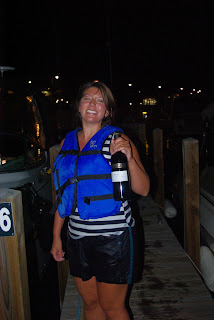 At least I got a bottle of wine out of it :-)
About 11:30pm, we were diligently working on updating the remainder of our posts up to day 5... when we heard a giant crash from behind our boat. Looked out the back window, and saw a giant dog struggling in the water, and his owner on dock, trying to figure out how to help him get out. If it were a cocker spaniel, or even golden retriever, no problem. But it was a freaked out, panicking Newfoundland! The owner got in the water to try to calm the dog down, but there was no way he could lift him out. Ben and I ran over to help, but there was no way to lift the dog out, and the ladder was too small and the dock too high for him to use.

Making no progress, we decided to try to get him up onto the swim platform of our boat, which would be lower to lift him. Ben and the owner tried lifting the dog several times, with Ben on the swim platform and the owner in the water... after probably 10 minutes or more of this, the owner was getting tired. It made more sense for me to jump in to help, because Ben had a better chance of lifting him out from the swim platform... and keeping him there once he got out. So I put on a life jacket and eased over to the dog, trying to support part of him on my shoulder and help the owner push him up towards Ben. Poor thing.. he was so scared he didn't know what to do! Eventually we were able to lift him to the swim platform, and Ben held him there while the owner got out and tried to call him back onto the dock.

Moses finally out of the water and back over by his boat, the owner got out the only other thing he had with him... a bottle of Cabernet he bottled the week before, as a thank you gift. Ben and I were just happy to help get the dog out of the water... he was so panicked I don't know how long he would have lasted. :-/ Turns out he fell backwards off the boat and it was his first time in the water..

Anyway... now it's 12:45am, showered and warm, and getting back to updating our other posts. Check back soon!