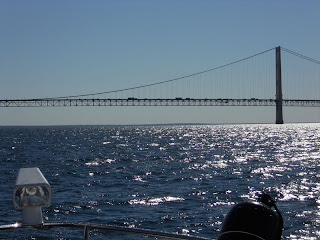 The weather forecast for this morning called for 2 foot waves, building to 2-4 foot later in the day, but we decided to get up early and try to head to Mackinaw City anyway! Mackinac Island was our ultimate goal for this trip, and we didn't want to give it up even though the waves/winds have not been cooperating! So at about 8am we loaded up our bikes and got ready for departure to Mackinaw City, approx 55 miles northeast.
The lake started out pretty managable... about 1 foot rolling waves out of the west... but soon those waves started building. About 5 miles into the trip, they had built to 2-3 foot waves, and were still building! The worst part about the wave conditions was the direction they were coming from... west. We were trying to travel north, but to do so we would be constantly broadsided by the waves, so we had to alter course to hit the waves from more of an angle, and then turn to have them following from behind.
By the time we entered the Straits of Mackinaw we were in 5-7 foot waves!! They were slow building waves... just enough time between each so we could watch them build up in size and get thoroughly scared about the size. It was honestly the most scared I have ever been with each wave twisting us a different direction, and there wasn't much we could do about it. If we went any faster than the crawl we were going at, we would slam into the trough and back side of the wave in front of us, making it possible to breach the boat! Any slower and the waves could come up from behind and swamp the boat....it was the longest 3 1/2 hours of my life, and a situation I'll be sure to never get in again!
After we reached Waugoshance Point the waves subsided enough, partially blocked by Beaver Island for Dana to grab the video camera and shoot some video. 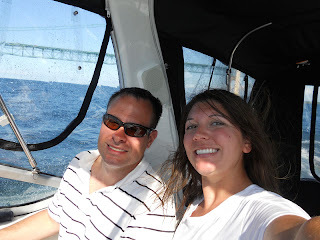 Finally we made it to Mackinaw Bridge and got our picture under it! (This is how we look after a soaking wet, windy, hellish 3 1/2 hour lake trip. Was it worth going through 3 1/2 hours of rough lake conditions?? We haven't decided yet. Maybe once our backs stop hurting we'll have a different view! :-) 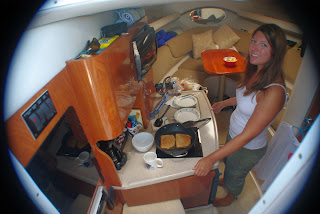 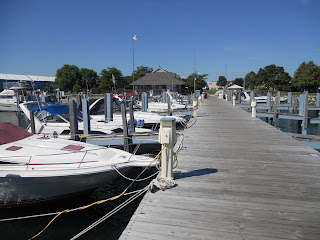 Needless to say, when we got to the Mackinaw City Municipal Marina at 11:20 am and docked in slip 35, we were beat. But extremely happy to be off the lake for a couple days. We followed our soaking wet boat ride with some comfort food, a lunch of grilled cheese and tomato soup on the boat, which made us feel a little better, and then hot showers and a 4 hour nap, which made us feel very refreshed! 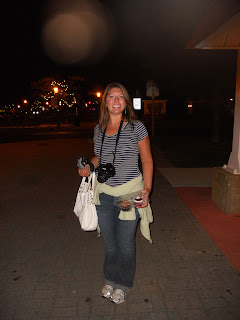 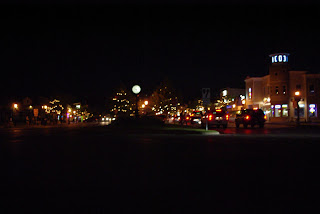 We finally headed into town around dinner time and did a little shopping, followed by dinner at the Admiral's Table. It was a little off the beaten path, and the clientel looked like they had been coming there all their lives. Even though it was about 8pm when we arrived, the place was packed! We ordered crab cakes, followed by perch for me and cod for Ben. I also tried a glass of the leelanau reisling, a local wine, and it was delicious! We ended the night by tracking down the cupcake place I just had to find and I got the red velvet cupcake I'd been dreaming about all day! Oh... and stocking up on food & supplies at the local IGA, a good 3/4 mile from the marina.
Overall a long day... but we were excited to explore Mackinac Island in the morning!
Posted by Ben and Dana at 6:31 PM