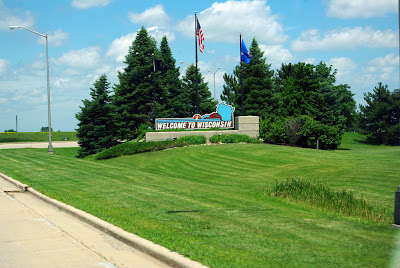 If you remember this post from a few months ago, we were thinking a Door County, Wisconsin trip would be our "big trip" of the year. Well... soon after writing that, we decided that we're heading to Northern Michigan and the North Channel for 16 days this summer instead! BUT, we still wanted to spend some time in Door County, since it's been a special place to Ben since childhood. So we found time for a long weekend trip (Thursday-Sunday) and loaded up the trailer for the 5+ hour drive to Little Sturgeon Bay! We left the house about 11am, and arrived in Little Sturgeon Bay around 5pm. The trip took a little longer than expected since it was the first trailer trip of the year, and we stopped multiple times to make sure the trailer tires were holding up.


Our first stop once getting settled in at the dock was Birmingham's in Sturgeon Bay. Ben's family always stayed at Andropolis Cottages in Sturgeon Bay, and Birmingham's (right down the road) was a must-have on every vacation. Ben ordered the Filet & Deep Fried Lobster Chunks, and I ordered the Filet & Shrimp. Both were excellent, served with salad & baked potato. After dinner, we made the mandatory Walmart stop where Ben got an "As Seen on TV" Expanding Pocket Hose!!! which he says is the "best purchase EVER." :-)

Friday morning I made blueberry pancakes on the griddle (fresh picked blueberries from our garden!), then went for a swim in the pool, and finally relaxed on the back on the boat with my book and coffee. PERFECT first day of vacation so far! We were having a great time at Wave Pointe Marina, so we took our time in the morning and left for Sister Bay, with a stopover planned first at Horseshoe Island.

The weather forecast was not looking to be in our favor, but we lucked out and missed all of the storms and rain surrounding the area.

The trip from Wave Pointe Marina to Horseshoe Island was pretty smooth, although watching the storms move in to the south and to the west of us was a little unsettling.  We lucked out though, and arrived to Horseshoe Island in less than an hour. We were very excited to be there... we weren't sure if we'd make it or not on this trip, and we heard that it can get very busy on weekends.
Horseshoe Island was all that we'd hoped it would be. A quiet, protected little anchorage only 4 miles off Sister Bay. We enjoyed hiking the 1k "rugged" trail around the island, and seeing that outside the protection of the island the wind was howling and waves were building. But we spent a wonderful afternoon relaxing before heading over to Sister Bay for the next 2 nights.


As soon as we were outside the protection of Horseshoe Island, around 5 in the afternoon, the waves had built to 4-6 feet and we were forced to make a slow 4 mile journey to Sister Bay Marina. We arrived in about 45 minutes, feeling very windblown and worn out! The very friendly harbor master, Wendy, suggested dinner at Husby's when we asked for a good perch dinner. And she was right on! The perch, walleye and cheese curds were fantastic! As was the atmosphere, beer list, and service. We liked it so much we went back Saturday night for the BBQ Rib special!


We spent a relaxing Saturday in Sister Bay. Enjoying coffee on the rocks in the morning (as in, coffee on the breakwall, not coffee on ice), breakfast at Al Johnson's Swedish Restaurant (famous for their goats on the roof), and then a long walk and some shopping. Later Ben took a nap while I walked to the Country Walk Shops and bought some Renards Cheese at the Piggly Wiggly. My lunch purchase was rounded out at Cupcake Heaven, with a strawberry shortcake cupcake for me, and a peanut butter cup cupcake for Ben. After lunch, another walk and some shopping (new pink Door County cap for Dana!) and then dinner again at Husby's (excellent again, but longer wait on Saturday night).

Overall, we had a wonderful, relaxing 4 day weekend. We wished we had more time to explore more Door County ports & islands, but I guess that leaves a reason to go back for the next adventure!