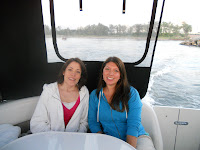 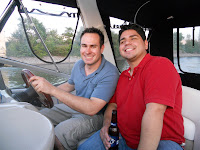 All four of us climbed on the bow to get ready to watch the show, when a Chicago police boat came by us on plane, and not more than 30-40 feet away on it's way, not to an emergency, but to set up the perimeter away from the pier!! I yelled to hang on, but we think Lisa got the wrong message because she grabbed on to Sergio's arms which were wrapped around her leaving Sergio with nothing to grab on to! They both almost flew into the drink as the boat shifted violently. Now...I support the boys in blue, but come on that was complete B.S. If I had done the same thing to them I'm sure I would be working overtime trying to pay the hefty fines I probably would have received!
Well we didn't let that little incident ruin our night, and shortly after the fireworks started and all was forgotten. It was well worth the trip. Seeing Chicago lit up at night, and watching the fireworks launching over Navy Pier from the lake is something you really need to see to appreciate. What a beautiful city!
Posted by Ben and Dana at 12:15 AM