Sorry, not sorry... he's just so cute! :-) There are plenty of ways for a toddler to entertain himself on a boat. See pics below for proof!

The winds were still howling and it was time to spend a night in port and recharge, so we took off for Little Current late Tuesday morning.  As an added incentive, Roy Eaton was hosting the annual July Cruisers Net Rendezvous at the town docks, and we hadn't made it to one yet! The seas were rough though on our cruise from Oak Bay/Hotham Island to Little Current, and we made it into a slip just in time for Dana and RJ to rush off the boat and make it for the end of the rendezvous (and just in time to register, and win a prize! haha)  It was great to see some familiar faces, including Bob and Susan, who left earlier that morning from Hotham.

After getting Seapickle tied up and situated, Ben was able to join us at the Rendezvous, and then we took RJ for a quick walk to Low Island park, just past Spider Bay Marina, where there is a sand beach and nice view of the channel. It's always nice to be on land after a few days on the boat, especially to let RJ run off some energy.

The next morning we enjoyed breakfast at the Anchor Inn then shopped and wandered around for awhile before putting RJ down for a nap. While he was napping, Orca and Ceiba II arrived and fought a heavy current into their slips. We were happy to be reunited with old friends, and meet some new ones! Paul (Orca) brought along Jamie, Sara, and Bogdan as crew for this part of his trip. We met Jamie and Sara the previous year, and were so happy to reunite! Orca was also traveling with another boat from his marina, Brett and David aboard Ceiba II.

Ben spent most of the afternoon diagnosing and oil leak that was affecting the dinghy motor, and was glad to have the assistance (and some drinks) with our friends on the dock.  RJ had another late nap, and then it was time to head to dinner at the Anchor Inn! We had an amazing dinner with equally amazing people, and were glad to have met Brett and David on this trip as well.

Side note: The next morning, we needed to get some groceries and jugs of water from the store, which is a pretty decent walk from the marina.  Bogdan, who we just met the night before, handed over the keys to his BMW without any hesitation, even though they were leaving before us and Ben would have to return the keys at the next anchorage. Those Canadians sure are friendly, eh?


Hotham Island Soundtrack - alternate title,
When You Are So Into The Music You Just Let Your Dinner Burn on the Grill

Our amazing musician friends Jim Krause and Anne Hurley - music available on their website here - http://jimkrausemusic.com/
Posted by Ben-Dana at 2:58 PM No comments:

A Typical Day with a Toddler on a Boat


Monday, July 24 - Left Fox Island and communicating with friends on next destination

Our friends, Jim and Anne aboard Traumfanger, were headed to a yet-to-be-determined anchorage in Oak Bay / Hotham Island that would be protected from the wind. We met Jim and Anne, also from Indiana, on our 2nd North Channel trip in Marianne Cove and they've become great friends!

We found them in the South anchorage around 3 in the afternoon, and were also joined by Bob and Susan on Le Voyageur. This made for 3 boats from Indiana in the same anchorage!

We've passed through Oak Bay once before and stayed for one extremely windy night in Leroy's Cove (on the GLCC chart), but we didn't have a great experience. Because of that, we were hesitant to go again to Oak Bay on another windy day.  We're so glad we did though, because the south anchorage on Hotham Island was beautiful and calm, and we were the only boats there for the day.  In North Channel standards it's not the most exciting anchorage, but it allowed us some relaxation and plenty of time to visit with our friends! It was so quiet that we could listen to the music being played on Traumfanger from across the anchorage, which is such an amazing part of any of our NC trips.

We had a wonderful visit aboard Traumfanger! RJ enjoyed exploring every bit of the boat, carrying around cherry tomatoes (no, it did not end well), and testing his limits on the stairs and deck.  After a few days at Fox by ourselves, it was a nice change to be around a great group of friends. Having friends in our traveling destinations makes for a much easier trip for Ben and I, and gives RJ some entertainment. ;-)  We're so lucky to have met such wonderful people in our travels. 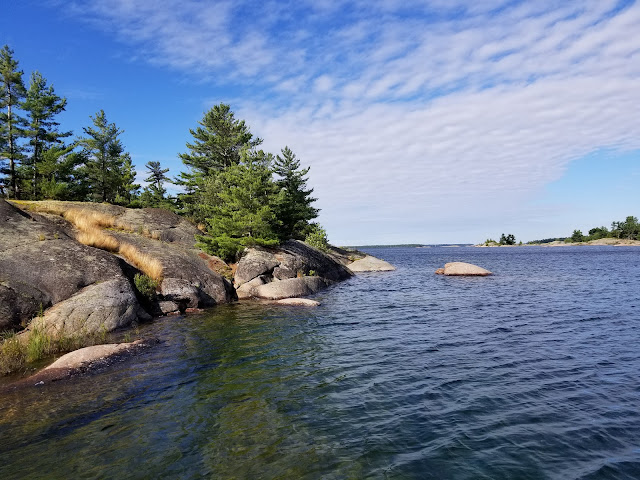 We woke up to a beautiful, sunny morning Monday, but there were still very strong NE winds.  The wind/waves were starting to tuck around our rock, and we discovered our friends were nearby, so we decided to move on from our new favorite spot.