Day 13: From Thunderstorms to Squalls to Clear Blue Skies

Wednesday, August 7th: We woke this morning to the strongest thunderstorm we've experienced so far in the North Channel. We felt confident in our anchoring by now though, so we just marveled at the coolness of being in Covered Portage Cove in a thunderstorm, and went back to sleep.

We spent the morning relaxing on the boat listening to the Civil Wars and the Swell Season "Low Rising" album. Outside it was almost silent aside from the splashing of birds diving for fish. A few boats left the anchorage, but most seemed to be staying with us another night.

The highlight of the morning was making our VERY FIRST check in to Roy on Cruisers Net. I (Dana) listened intently to boats checking in from the Whalesback, the Benjamins, and finally moving to East of Little Current. We heard our friends on Traumfanger check in from McGregor Bay, and our new friends on Eddie J were in the studio with Roy that morning at the Anchor Inn. I don't know why I have such an aversion to using the radio, but I felt very brave as I checked in "Seapickle II in Covered Portage Cove." It was very cool to hear our name repeated back and know that all the other area boats heard us! 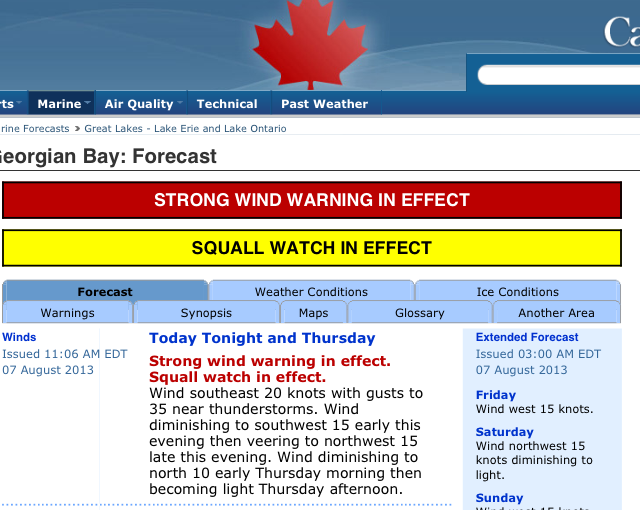 As we sat enjoying the peacefulness of the anchorage, suddenly the winds picked up from the west, and we saw (on weather forecast) a SQUALL WARNING was in effect. The skies darkened and the 30 knot+ winds were hitting us broadside, finally causing us to undo our stern lines and swing at anchor. There was really nothing else to do but pour a drink and hope the anchor held!

Probably less than 20 minutes later, the dark skies disappeared and the sun came out! The wind was still howling though, so Ben took the kayak out to look for a more protected place to anchor for the West/NW winds we were having. He came back after finding a perfect spot in the outer harbor of Covered Portage Cove. We quickly pulled anchor, gathered our discarded lines from shore and set up just across the other side of a big rock wall in the outer harbor.

Fully protected now, we couldn't even feel the effects of the wind! With the clear blue skies and warm temps, it seemed like the perfect summer day! We both went for a swim in the 75 degree water and enjoyed the sunshine, Ben floating on a raft and enjoying a Molson Canadian.

After a quick late lunch, we decided we better kayak over to the hiking trail to take in the views of the harbor, Frazer Bay and Killarney Bay. It was a nice hike up the rocks to the top of the cliffs, and the trail was marked clearly the whole way with strips of fabric tied to branches. We passed tons of blueberry bushes, and gathered some for pancakes in the morning. I insisted on doing yoga on the edge of the cliff, making Ben a nervous wreck. :-)

It was close to sunset now, and we didn't want to be stuck on the trail or kayaking in the dark, so we headed back down the rocks and kayaked back to the boat. There, Ben made a nice "date night" farfalle alfredo and we played a game of Rummy (I always win). It was a very dark night, and we saw about 5 shooting stars in the short amount of time we stargazed before bed. Couldn't ask for a better day! (Well, maybe we could have done without the squall)