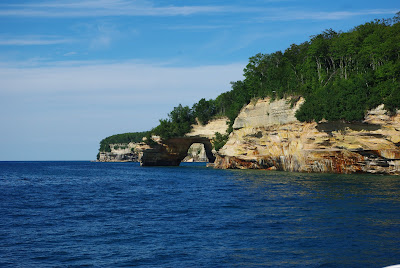 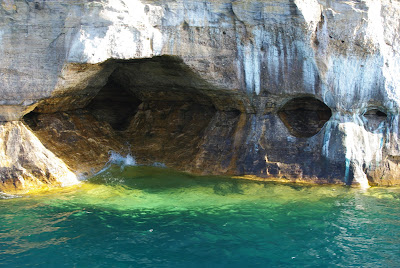 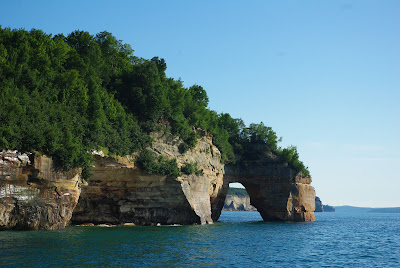 We woke up Monday morning to beautiful blue skies and plenty of sunshine. There was a plane fueling up behind us at the gas dock, and it drew quite the morning crowd! It was very cool to watch the plane land and come in, then head back out into the lake.

As was becoming a theme on this trip, due to unforseen circumstances we were again on an island miles away from stores/food and we were completely out of food & water on our boat! We had some canned chili, but one can only survive on canned chili for so long. ;-) We were longing for a good meal, so even with storm clouds rolling in Dana decided it would be a good idea to walk the 3 miles to the grocery store. She figured, since it's an island, someone would take pity on us and pick us up on the way!

We walked about a mile in the noon heat, and thank goodness a nice girl who worked at the local coffee shop picked us up and drove us to the grocery store. She offered to wait for us while we did some quick shopping and would then drive us back to our boat. We got into that grocery store and were so excited to see fresh fruit & veggies, steaks, and buffalo cheese curds!! that soon our cart was full and we were headed to check out. Just as we made it to the counter... everything shut down... the storm had come in and the power was out. So, remember, we're on an island, and the people in the store are freaking out, and we don't have any cash left, so we can't just pay cash, and they can't run a debit card, and when there's a power outage on the island it usually takes HOURS before it comes back on. So... we regretfully push our full cart into one of the coolers to return for it later, and run outside so we can catch a ride back to the marina. No food for us :-(

We got back to the boat and were just bummed out and hungry. So against Dana's principles, we went to the office and arranged to rent a car to drive to dinner about 4 miles away. By now there's gale force winds, we don't want to attempt to walk to a restaurant, bicycles cost $8/hour (EIGHT DOLLARS AN HOUR!!!) to rent and we don't really have any other choice. We reserved a car, they pointed out to us which one to take and told us the keys were just kept in the ignition. So to make a long story short, we got all dressed up for dinner and were so excited to get out to explore, and also to stop at the grocery store on the way to get food/water for the next few days. And when we walked back over to get the car...IT WASN'T THERE!!

We looked around for the car, for another car with keys in the ignition, for someone who worked there... but had no luck. Then we walked by the bike rack, and noticed that the bikes weren't chained up. Our stomachs decided for us that even though the wind was blowing 30 miles per hour, the bike tires were low on air, and it was getting close to dark... we were going to ride those bikes to find food. Luckily about a mile into our ride, we passed a car repair shop and Ben filled up the tires so the rest of the ride was much much easier.

We ended up at the closest restaurant, Sune's Family Restaurant, and parked our bikes for dinner. (And there in the parking lot was the car that we rented.) We enjoyed a nice dinner, drinks and then ice cream across the street at a little ice cream stand. We didn't make it to the grocery store before it closed, but at least our bellies were full for the day.


We returned to the marina just at sunset and took a little bit of time to relax. We decided we didn't want to attempt again to find food and groceries the next day on the island, so we made plans to leave early in the morning for DeTour, Michigan and spend a few days exploring by truck!

We decided last night to start making our way home. At this point we both felt like we had dodged a few too many disasters so far on this trip, and maybe the little luck we have had would run out. The next stop on our revised itinerary is Drummond Island.
We incorporated all of the leftover meat and produce into breakfast since we couldn't take it over the border. Pulling out of Gore Bay at 11:30 we found the water to be calm, but the visibility was poor due to fog. We still made good time but with the fuel gauge getting uncomfortably close to empty we changed our course for a quick fuel stop in Meldrum Bay. While there we realized how much we loved it there and will miss it! We really hope to return someday.

As we approached Mississagi Straits the seas got considerably rougher to point that we had to slow down to about 8 mph and just plow through the choppy waters. Once we on the leeward side of Cockburn island the seas returned to their previously calm state and we were able to throttle back up to a nice cruising speed.

Once near Drummond Island we called in for a transient slip at Drummond Island Yacht Haven to check into customs and possibly stay a couple nights. The customs officer visited our boat shortly after tying up and after showing proper documentation, answering a few questions, and a very brief look around in the cabin we were officially cleared and welcomed back to the states.

There is a beach next to the marina so we took our floats and beach towels and spend some time just relaxing in the sun. As it got later we walked over to a westward facing park bench and enjoyed a nice sunset over Harbor Island which happened to be the very first stop on this trip!
Posted by Ben-Dana at 10:08 PM 1 comment:


After a great night anchoring on Croker Island, the weather/wind report was looking a little rough, so we decided to spend a few days at the Gore Bay Marina. We had heard good things about Gore Bay from a few boating friends, so we were eager to relax and explore this little town on Manitoulin Island, Ontario. Plus, we were pretty much out of food again, so we were looking forward to going out for a nice dinner and stocking up!

We called in to the Gore Bay Marina and were quickly directed to a slip to tie up for a couple days. We were excited to find out that the weekend we were there was their Harbor Days Festival, so there was live music, cardboard boat and dinghy races, food & events taking place right across from our boat! Ben got us a few sandwiches and chips from the Lion's Club at the Festival, and after lunch I finished my book on the bow while Ben hibernated in the air conditioning.

A little later on we walked over to the beach and searched for fossils. The water was beautiful and crystal clear. And we found some pretty cool fossils! 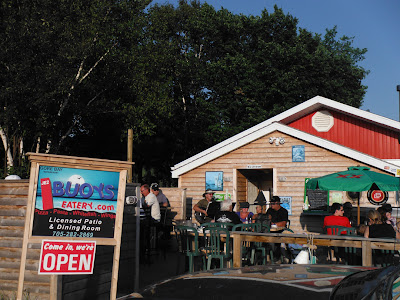 We decided to go out for dinner, and chose a little pizza place on the bay. They had outside seating on the patio, live music, great pizza and local wine... a perfect choice for a vacation dinner!

At dinner we talked about the challenges of our trip so far, and whether we wanted to press on farther east. (farther away from the US, and from our truck/trailer, and safety!) After much debating and sadness, followed by relief, we decided to make the run back to the US in the morning and spend the next few days in Michigan's UP.  We settled on Drummond Island for our first stop in Michigan, since they had a US Customs office at the marina. So on to Michigan!

When we left off our last post, we had just purchased a new "North Channel approved" anchor in Gore Bay, and were headed 14 miles northeast to Croker Island for the night. We had great weather and pretty calm seas for the trip, and loved seeing all the islands on the approach to Croker.


Once we navigated around all the rocks and shallow spots, we were finally inside the harbor. But since it was sorta late in the day by then (4pm), most boats already had their spot at anchor and the anchorage was pretty filled up. We anchored Seapickle outside the harbor and Ben took the kayak out to check depths and find a good spot for us to anchor out for the night.


We were in luck that there were actually a few good spots left, so we choose one close to shore and tied our back anchor to shore and put two anchors out front, just to be safe.
Given the scary night we had the last time we anchored out, when both front anchors came loose at night, Ben put on the goggles to swim out and see that the anchor was set good himself before he could relax.


While he swam out to check on the anchor I kept a look out for Steve the water snake, who was our first visitor soon after anchoring. Ben thought he would be safe since "snakes can't dive & swim underwater," but Steve soon proved that theory wrong. ;-)


As soon as Ben decided we were safe and anchored securely, we hopped in the kayak to explore the island. It was beautiful climbing around the rocks, picking (tiny) blueberries, and just enjoying being in spot we had dreamed about for so many months leading up to this trip.


Once we felt we had sufficiently explored our surroundings, we settled in for dinner (leftover sloppy joes) and a few games of Phase 10! This turned out to be a great game to take on our trip, especially since Dana won every time!


Once it was almost time for sunset, around 9pm, we kayaked over to a spot where we could watch the sunset over the Benjamin Islands. Overall, we were thrilled that we made it this far and that we didn't give up. The day we had today and this beautiful sunset made everything worth it, and we're even able to look back on the scary night a couple days before and laugh about it. This is what memories are made of after all, right? :-)