Well we've come to the end of another wonderful season with Seapickle II, and normally this starts the most depressing time in a boater's life....winter :-( Part of the reason we bought the trailer was to open up our storage options and more specifically so we could store the boat in heated storage instead of the outdoor storage we have used in past years. Once we had plenty of space cleared out in the warehouse we still had one major obsticle to overcome, the top of the boats arch was 4-6 inches taller than the opening of the garage door. We spent the last month cleaning and clearing space all while assuming the boat would fit so I was determined to find a way to squeeze under that door! Our only option would be to remove the boats arch.
After removing a few panels in the cockpit we were able to easily access the 6 bolts that hold the arch to the hull of the boat. We were unsure how heavy the arch was so we asked Ben's dad Bill to be there to hold the arch while Ben removed the bolts. Once all 6 bolts were removed we were shocked at how light this arch really was. 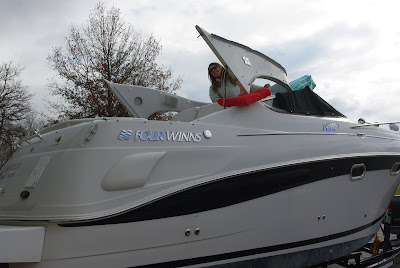 We set our V birth fill-in cushion on the helm and rested the arch on it without any problems and now the boat cleared the door with ease!
Once under the door we had plenty of ceiling height inside the building so we raised the arch back up, after all we don't want that big arch getting in the way of our mid winter cocktail parties we're planning ;-) 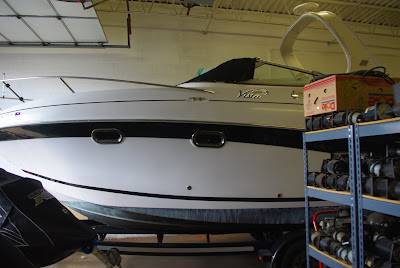 Stay tuned for some winter projects!
Posted by Ben-Dana at 7:57 PM 4 comments: 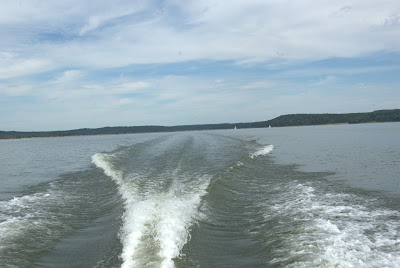 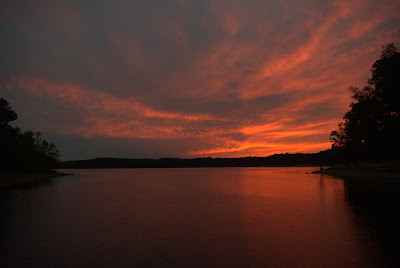 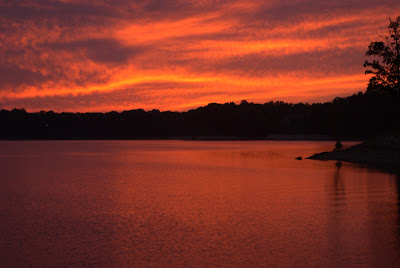 Saturday, Aug. 27: We woke up to a beautiful, calm morning and decided to take advantage of the great weather and lake forecast and take a cruise to Chicago for the day! Our previous harbor master, Gina, had moved to 31st Street Harbor in Chicago so we decided to pay her a visit and stay the night docked at 31st street.


31st Street Harbor is just South of downtown, so we took our bikes along so that we'd be able to have Ben's favorite Chicago pizza for dinner. It was wonderful to be out cruising on a perfect day, and we spent a lot of time marveling at the crystal-clear, caribbean-blue water.

It's a short 26 mile trip to Chicago, and with the smooth lake conditions we got there within an hour. When we arrived we called Gina at the harbor and secured a slip for the night on G Dock, a little away from most of the other boats (just like G Dock in our home marina!). 31st Street Harbor just opened this summer, so it was probably only at 50% of capacity. For our boat it was $80 for the night, which is a great deal for our hotel-on-the-water in the city.

After settling in and getting our personal access code for the facilities, we went off in search of the bike trail to get some exercise and then top it off with dinner downtown. Well we didn't have to go far for the bike trail. You would never know it from inside the harbor, but just outside the gate is a lively beach and the bike trail (filled with families in this stretch of trail) is just around the corner.

We ended up riding about 6 miles north on the trail to North Avenue Beach before giving in to the mid-day sun and heat and turning around back toward downtown & dinner! We took the trail in through Navy Pier, and then down a flight of stairs on the other side of the river.


And finally we ended up at Giordano's in Prudential Plaza, right off Michigan Avenue. They had an outdoor patio, so we tied our bikes up right outside the patio and were able to keep an eye on them while we enjoyed our dinner.


After dinner, we detoured through Millennium Park and over the new bridge connecting Millennium Park & Lake Shore Drive. It had cooled down a bit, so the ride back was much nicer :-)

We spent the rest of the evening relaxing and enjoying the quiet marina atmosphere, and taking in the views from the 2nd story park built over the harbor house & parking garage.

We've been making it a point this year to wake up for sunrise to take photos (even though we usually go right back to sleep!) Some of our favorite photos have been taken during the time right before the sun rises - it seems everything is most beautiful during this time of day. Today though, despite the gorgeous sky at sunrise, a huge storm system was making it's way toward Chicago & Northwest Indiana so we only had a couple hours to enjoy the quiet of the morning. We cruised back in calm seas and noticed we still had awhile until the storm looked like it would hit, so we anchored outside Ogden Dunes for a nap on the sun pads before heading back to dock.