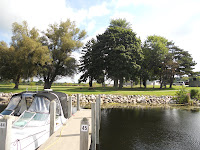 We had a nice, peaceful morning in White Lake beginning with breakfast on the boat. Dana made french toast and bacon, and we enjoyed breakfast outside in the quiet morning. There were only a few boats in the municipial marina, including 3 who were halfway through the great loop and having a "fantastic journey." After breakfast, we got back to trying to find an a/c pump. 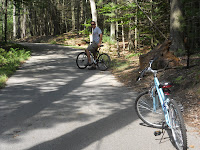 Without success, we decided to journey on our bikes to the lakeshore to check the lake conditions, since the NOAA weather report was calling for 3-5 foot waves. White Lake was about 6 miles long, so we figured we could manage it, and end up at the lake eventually. We found out this was a bad idea when 40 minutes later we realized the trail had curved and we were riding away from the lake! We aborted this mission and turned back around. It was still a nice bike ride though.. and we needed to burn offsome calories from all the good eating we've been doing! 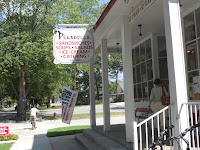 On the way back to town we stopped off at a neat little sandwich shop called Pekadill's and enjoyed a nice lunch. 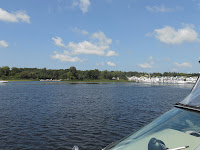 After debating back and forth, we decided to try to make it north at least to Pentwater. We loaded up the bikes and got ready for travel. Cruising through White Lake on the way to the channel, we were optimistic. It was hard to belive that Lake Michigan could be that bad considering White Lake was flat calm with little wind.
Entering the channel though, we could see boat after boat in front of us turning around mid-way out of the channel...we should of taken this as a bad sign. The channel between White Lake and Lake Michigan is a very narrow steel lined channel and it got really hard to control the boat the closer we got to the lake. Considering at that point it would have been too hard to turn around without smacking the wall, we went for it! 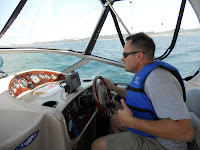 Bad idea. As soon as we were out of the channel we immediatly hit a wall of water followed by 5-6 foot waves one after another! We made it a couple miles before deciding to turn around and head back to White Lake. We were in a bad postion since turning around in waves like that can be dangerous. If one were to hit us broadside in mid turn we could roll. I was looking for a calm spot to turn around when a huge wave hit the bow, sending it skyward quickly followed by the bow diving into a deep trough. Shortly after I looked over to see Dana putting on her life jacket and handing me mine. We battled the waves a little longer until I found a good chance and in a quick motion poured on the throttle and cranked the wheel starboard before the next big wave hit us.
Whew! We successfully turned around, but now we had to try to get back in the channel, which might be even more dangerous. And to make it even worse, as I was concentrating on not crashing the boat against the steel wall, Dana pointed out in panic that 2 kayakers were trying to enter the channel right next to us! It's hard enough to keep the boat from hitting the wall, but now we had 2 people we could barely see above the waves to look out for. We had a few scary moments when the boat pitched sharply to the port side, but soon we were back into the calm. We learned our lesson. When boats bigger than ours are turning around and it looks too bad to go out, it probably is. :-) At least we gained some more lake experience. We will continue on our visit to White Lake in the next post. Thanks for reading!